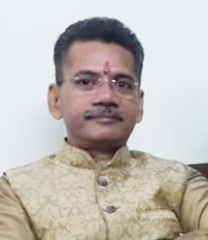 Ancient Indian History was initially taught in the Department of History, since the very inception of the University of Lucknow, over 92 years back. In 1956, it was established as a separate and independent Department of Ancient Indian History and Archaeology, with Prof C D Chatterjee as its Founder-Head. A great historian and Pali scholars, he made significant contributions in the fields of epigraphy and numismatics in general, and Asokan studies in particular. In 1982, the Government of Sri Lanka, University of Vidyodaya Pirivena, Colombo, honoured him with the degree of Tepitaka-Bharati-Essarachariya, the highest academic degree awarded by any foreigner by the University.

Prof Chatterjee was succeeded by Prof R K Dikshit (1959-1970), whose contributions in the field of political history, particularly the history of the famous Chandella dynasty, are well-known. After him, Prof B N Puri (1971-1976), a versatile historian, became the Head of the Department. The next Head, Prof B N Srivastava (1976-1988), is known in the field of art and architecture, and also for his administrative acumen. He was followed by Prof K K Thaplyal (1988-1991; 1993-1996), the noted epigraphist, numismatist, and archaeologist, who was awarded the prestigious Brahmi Award, for his contributions in the field of Indology, by the Kothari Foundation, New Delhi.

Other former faculty members of the Department include Dr S D Singh (whose monumental work on ancient Indian warfare, under the guidance of Prof A L Basham, is internationally acclaimed, and who later went to Australia as Professor), Dr A B L Awasthi (an authority on puranic studies, who later joined Dr H S Gaur University, Sagar, as Tagore Professor), Prof R Avasthi (a renowned authority in the field of iconography), Prof A Lal (a well-known scholar in the field of Buddhist Studies, who served as Vice-chancellor of Dr R M L Avadh University, Faizabad), Prof G S Bhadouria (an art historian), and Prof Amar Singh (who has made significant contributions in the fields of art, architecture, and iconography).

The Department is one of the first departments of History in the country to offer a full-fledged course in archaeology, producing a number of renowned archaeologists, and giving two directors-general (Shri J P Joshi and Shri  M C Joshi), and a number of high-ranking officials (like Padmashri Dr R S Bisht, former Joint Director-General) to the Archaeological Survey of India.

In 2012, the Department has been recognized as a Centre of Excellence by the Government of Uttar Pradesh, and under the scheme, sanctioned a handsome grant to conduct excavations at Kampil (District Farrukhabad, UP), under the direction of Prof D P Tewari.

The Department occupied the east wing of the Arts Faculty building, and is spread over an area of approximately 18,960 sq ft. There are, in all, six lecture halls, and rooms and cabins for some faculty members. The Department has a modest library, consisting of books, mostly received gratis, and is useful for PG students. The Central (Tagore) Library of the University is quite rich, and accessible to all the students and faculty members. Internet facility is available for faculty members in the Department, while students may access the internet in the well-equipped Central Library Internet Facility.

(Syllabi of the various programmes, on the University Website)

Bachelor of Arts: A three year course, with 320 seats at BA I level. Since the session 2018-19 the semester system of examination has been adopted.

Bachelor of Arts (Honours Course): A three year course, with 60 seats at BA I level. Since the session 2017-18 the semester system of examination is effective.

Master of Arts: A two year, four semester course, with 180 seats at MA Semester I level. The examination system is semester. There are two streams—Archaeology, with one section of 60 students; Culture, with two sections of 60 students each.

Master of Philosophy: A one year, two semester course, with 30 seats. Admissions are through entrance test, and the examination system is semester.

Doctor of Philosophy:  Admissions are through entrance test.

Unique features of the syllabi:

Student strength in the Department

The Department is one of the largest departments of the University, from the point of view of the number of students enrolled in different programmes run by the Department. There are 320 seats at UG level, 180 seats at PG level, and 30 seats in the MPhil programme. The number of students enrolled for the PhD programme at present is 44, including 28 research fellows (25 UGC-JRF & 03 ICHR-JRF) of the University Grants Commission.

Vice-chancellors from the Department