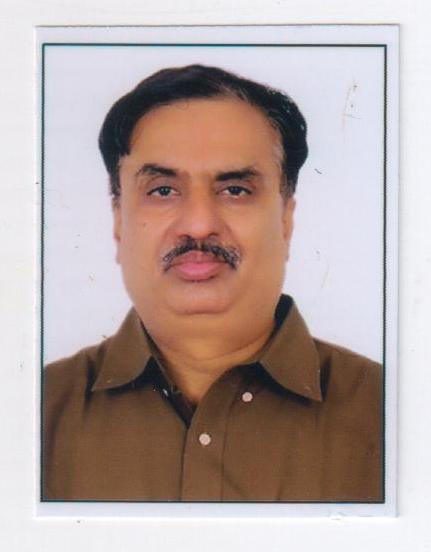 Prof. U. N. Dwivedi took over as the Head of the Department of Biochemistry in November 2006 and continued till November 2009. Prof. Dwivedi initiated research and teaching in the area of Biotechnology since 1993 with major fundings received from Department of Biotechnology (DBT) and from CSIR under NMITLI networking program. The M.Sc. Biotechnology teaching program, with Prof. U.N. Dwivedi as the Co-ordinator, started from academic session 2002-2003. This is a four semester program financially supported by Department of Biotechnology (DBT), Govt. of India and ten students are admitted every year through the common National Entrance Test conducted by JNU, New Delhi. The Department also introduced Biotechnology as one of the subjects at the undergraduate level from the academic session 2007-2008. This undergraduate program continued till 2012. The period was also marked by getting grants from DBT for development of a Bioinformatics Facility in the Department. The Department has also received Centre of Excellence Grant in the area of Bioinformatics from U.P. State Govt. in the year 2009.

After Prof. U.N. Dwivedi, Prof. R.K. Mishra headed the Department from November 2009 to January 2010 followed by Prof. V.K. Tandon, the then Dean faculty of science for another two months. In March 2010, Prof. S.K. Agarwal has become the Head of the Department followed by Prof. R.K. Mishra from March 2013 to March 2016. Presently Prof. Sudhir Mehrotra is heading the Department since 23th March 2019. The Department has also received Centre of Excellence Grant in the field of Proteomics, Protein Engineering and Enzymology from U.P. State Govt. under his leadership. The Department has been receiving funds and extramural research grants from various funding agencies such as UGC, CSIR, CSIR-NMITLI, DST, DBT, ICMR, UPCST, AICTE, etc. The Department has fully equipped laboratories which include labs for plant tissue culture, animal cell culture and also labs for proteomic and genomic studies. The state of the art equipment such as real time PCR (RT-PCR), thermal cycler, ballistic gene gun, HPLC, multiplex gel documentation system, ultracentrifuges, UV cross linker, deep freezers, fermenter, 2D gel electrophoresis system etc. are available in the Department. The students and faculty members have been publishing research papers in national and international journals of high repute, in various thrust areas of research such as plant biochemistry and biotechnology, enzymology, mechanistic aspects of diabetic complications, membrane biology, photobiology, cancer molecular biology etc. Till date, more than 200 students have been awarded Ph.D. degree from this Department.

Padmanabhan Subbarao Krishnan (PS Krishnan) was born in 1914 in Travancore (in today’s Kerala). After finishing high school in Travancore in 1930, he did undergraduate work at the Maharaja’s University College (today’s University College) in Trivandrum,and then joined the Madras Presidency College in Madras (today’s Chennai) in 1934 for graduate studies. Krishnan earned two Masters degrees, a Master of Arts degree in physical sciences and a Master of Science by Research degree in Chemistry. He stayed at the Presidency College until 1945 as a research assistant in chemistry. It was in those years that he developed an interest in plant biochemistry that continued throughout his career. He began a series of studies in those days on biochemical composition of seeds and published some of the work in Biochemical Journal. His scholarship in (bio)chemistry was recognized with the award of a membership in the British Royal Institute of Chemistry (FRIC). In 1945, he was given a stipend by the British Indian government to do graduate research work in biological sciences at Cornell University, Ithaca, New York, in the laboratory of Professor James B. Sumner.

Sumner was the first biochemist to fully purify an enzyme, urease, in 1929, a feat considered impossible in his day, for which he was awarded a Nobel Prize in 1946. His laboratory continued to make efforts towards purification and crystallization of proteins. Krishnan worked on purification and properties of apyrase (Hydrolase of ATP and ADP) from potato for which he was awarded PhD by Cornell University in 1947. He retuned to India and did research work at the Division of Biochemistry, National Chemical Laboratory, Poona (now Pune) from 1949 to 1956. His research interest remained with nucleotides and phosphatases. Krishnan and his student Violet Bajaj published several papers from Pune on apyrase, pyrophosphatases and polyphosphatases of aspergillus, a common mold growing on potatoes, bread and cheese and many other food products.

PS Krishnan joined Lucknow University’sChemistry Department in 1956 as a reader in Biochemistry and was promoted to full professor two years later. Thanks to his relentless efforts and generous support from the University Grants Commission and Rockefeller Foundation, an independent department of biochemistry was established in its own building in 1963.From then on, until his retirement in April, 1975, Professor Krishnan worked tirelessly to improve the quality of biochemical education and research in the department. The areas of research interest in the department were nucleotide metabolism, energy and oxidative metabolism of aspergillus, biochemistry of parasitic plants, and development of methods for protein purification, protein and phosphate measurement. Strikingly, PS Krishnan had an active and wide interest in plant biochemistry right from his days in the University Biochemical Laboratory in Madras in the 1930’s up until his retirement from Lucknow University. He was a great lover of plants and his infectious enthusiasm for gardening was well-known to his students. 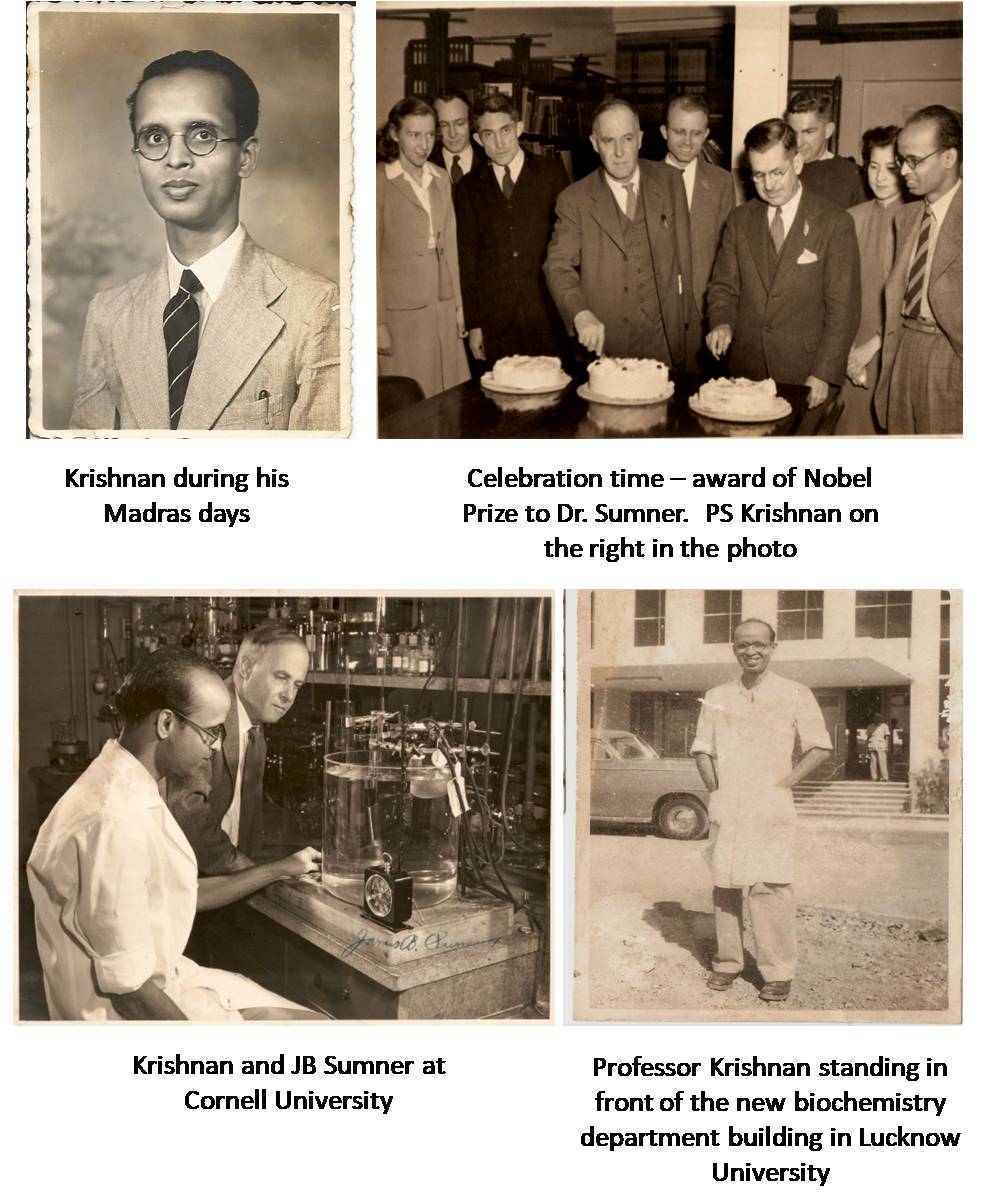 Numerous students worked for their PhD under his supervision and some of them later chaired the departments of biochemistry at different universities in the country including at Lucknow. The work of his students appeared in prestigious journals such as Biochemical Journal, Archives of Biochemistry and Biophysics, Journal of Neurochemistry, Nature and others. He served on the Editorial Boards of several international research journals such as Biochemical Journal, Enzymologia, Biochemical and Biophysical Research Communication, Phytochemistry and the Journal of Biochemistry.

After retirement, Professor Krishnan returned to Kerala and was honourned by the Calicut University with the position of Emeritus Professor. He continued to guide and help his students submit their theses towards obtaining their PhD degrees.Following a short period of illness, he passed away in December, 1994.  His ashes were immersed at Kanyakumari at the confluence of the three seas. Thus ended the saga of a truly great and loving teacher and a kind and caring human being.